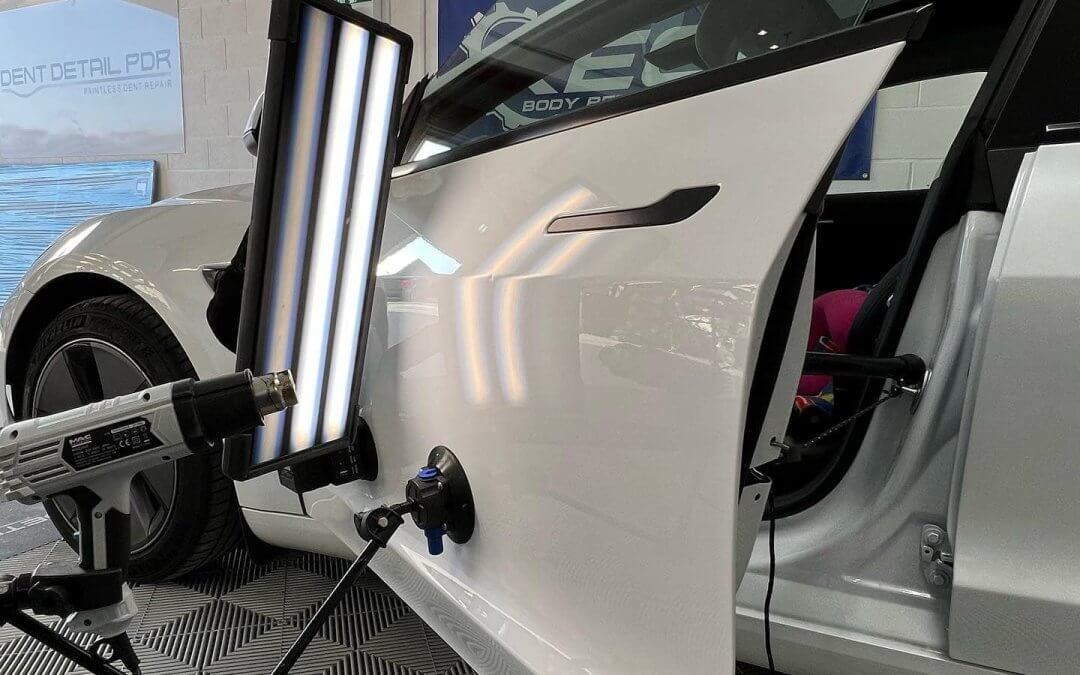 To keep your car looking pristine, you have to make time for processes like dents, dings, and bumper repairs. However, a traditional body shop can damage the cosmetics of your car while dealing with these dents. That’s where the dilemma occurs for most people when they have to choose between dent removal and paint sustenance. What if you can have both?

What Is Paintless Dent Repair or PDR?

Paintless dent repair removes minor dents, dings, and creases from a vehicle’s body without using traditional auto body fillers and paints. This type of repair is often performed by specially trained technicians who use various tools and techniques to massage the dent out of the metal gently. Paintless dent repair is considered a safer and more environmentally friendly alternative to traditional auto body repair, and it can often be completed in a fraction of the time.

What Is the Process of PDR?

Paintless dent repair is the process of repairing dents and dings in a vehicle’s body without paint or filler. The process is often used to repair hail damage, dings from shopping carts, and other minor dents and dings.
The first step in the process is to assess the damage and determine if paintless dent repair is a viable option. If the dent is too deep or the paint is damaged, traditional repair methods will need to be used.

Once it has been determined that paintless dent repair can be used, the next step is to gain access to the back of the dent. This step is usually done by removing a panel or trim piece.

Once access is gained, the next step is to use special tools to massage the dent from the backside. These tools are designed not to damage the paint or body of the vehicle. The factors considered for selecting the tools are the location of the damage (inside or outside), depth, thickness, or distance from edges or other protrusions.

Once all those factors are established, technicians use suction cups or pneumatic hammers to push out dented areas of your car’s bodywork until they reach an equilibrium with surrounding panels.

The final step is to inspect the repair to ensure that the dent has been removed and the area is smooth. If everything looks good, the panel or trim piece can be replaced, and the repair is complete.

Why Using the Best Dent Repair Service Is an Ideal Option?

There are many benefits to choosing paintless dent repair (PDR) over traditional dent repair methods.

Why Is Dent Detail the Best Dent Repair Service in Warrington?

You can’t trust someone who has no certification in handling such intricate work as paintless dent repair. However, Dent Detail Repair in Warrington has a team of level 2 IMI accredited technicians that can make your car brand new again without leaving its mark.

Their efficiency and craft will have you returning for their service or calling them back to your home or work for dents, dings, and bumper repairs thanks to their mobile service.