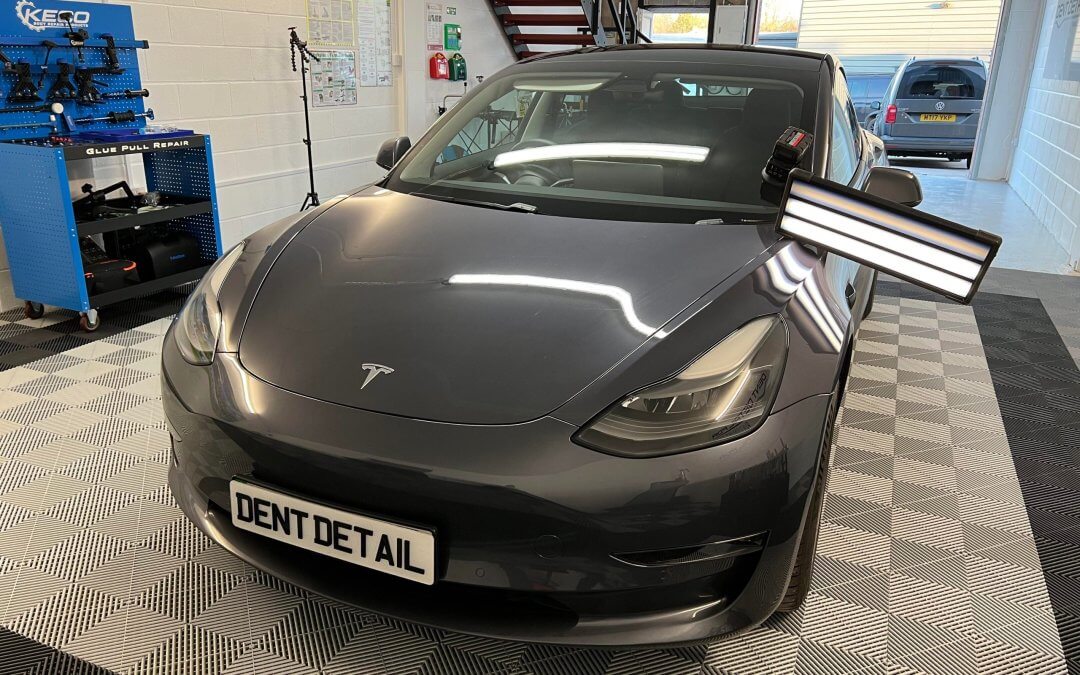 With a zero-to-100 acceleration of around 3 seconds, over 500 kilometres of range on a full charge, and all the latest tech features, who wouldn’t want one. Recently, the Tesla Model 3 became the first electric car to sell over a million units globally.

If you drive a Tesla Model 3 in the UK and it catches dents or dings, you should opt for the best dent repair. This means paintless dent repair from a specialized PDR service like Dent Detail.

Paintless dent repair, or PDR, is the best type of dent removal method you can get for the dents and dings on your Tesla Model 3, and Dent Detail specializes in Tesla dent repair with PDR.

They apply the three-step PDR process for dent removal, which has many benefits over any other type of dent repair.

This is how Dent Detail uses the PDR process for your Tesla.

This professional dent removal process requires no disassembling, scraping, filling, or repainting of body parts. A PDR-certified technician from Dent Detail simply restores your Tesla to its original form.

A Tesla Owner’s Experience with PDR from Dent Detail

Most 2021 Tesla Model 3 car owners enquire about door dents, which is the most common dent repair issue for Tesla owners in the UK. This is because its sharp bodyline is the first point of contact when another car door is opened next to it.

A recent Dent Detail Customer had the same issue with their White Water, 3-stage pearlescent, 2021 Tesla Model 3, that was just 3 weeks old. Getting the dent filled and repainted was out of the question, so the customer turned to PDR from Dent Detail for the first time.

They were invited to watch how the PDR process was being applied, where they saw a PDR certified technician use specialist PDR tools, techniques, heat, and their hands to repair the dent from the backside of the panel, resulting in a perfect restoration.

As mentioned in their Google review, the Tesla is back to new, with original factory paintwork intact, no insurance claim, and no evidence of it ever being damaged. Making use of our mobile PDR service, the work was carried out in the comfort of the client’s home.

Benefits of PDR For Your Tesla

The benefits of PDR for your Tesla are immensely attractive, especially if you opt for Dent Detail and their mobile PDR services in the UK.

Where Dent Detail Offers PDR for Your Tesla in The UK

Dent Detail offers its PDR services for your Tesla all across the UK and its surrounding areas, including the following service areas.

If you want to learn more about Tesla dent repair in the UK, paintless dent repair, or if you want a free estimate for the dents and dings on your Tesla, please visit our website today.