Can you repair a dent on a Tesla? 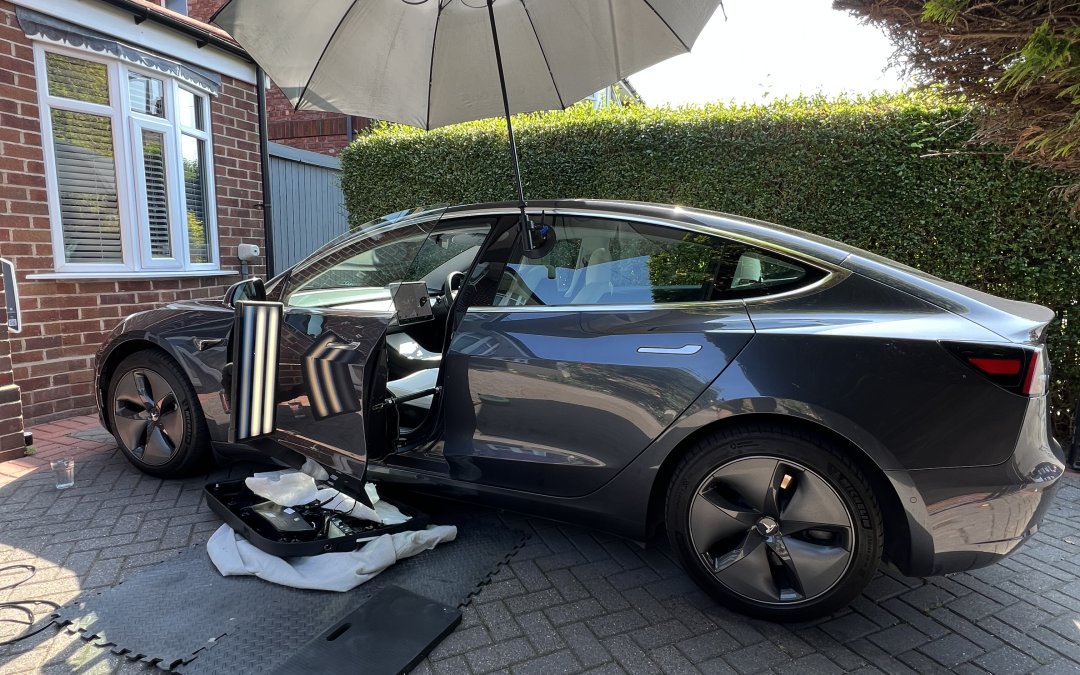 Dent repair on a Tesla Model 3

Here at Dent Detail PDR we get asked a lot about a dent repair on a Tesla Model 3. The main concern is the fact that these cars are fully electric. Because of this, a lot of people are put off by the complex repairs these need.

But, as we are accredited by the IMI (Institute of the Motor Industry), we are fully trained to power down these electric cars.

For example, if you have a dent on the charge port side quarter panel, and we can’t glue pull the dent, we need to push the dent out from the inside. Now because its on the panel with the power cables running through it, there is a risk. Sometimes we need to use sharp dent removal tools to repair the dent. If the technician slipped and pierced one of these cables, he or she could be electrocuted and set the car on fire!

If the car had been correctly powered down, there would be no risk of this happening. Because we are trained to turn off any Tesla, or any electric car for that matter, rest assured you and your EV are in safe hands.To power down EV’s, a certain procedure has to be followed to the respective manufacturer methods. Just because its an electric car, it doesn’t mean it can be powered down the same was a different brand electric car.

What is a common dent on a Tesla Model 3?

The most common dent we come across, on any Tesla model for that matter, is one right on the body line of a door. This is because the body line, or swage line protrudes out the furthest on that panel, so it will be the first point of contact from another car door hitting it. A body line is a styling line thats in panel, its effectively where 2 sheets of metal, or aluminium meet to create a sharp point. Because of this, they are a lot harder to repair.

A Tesla door is aluminium, how do you fix it?

To make the repair that more tricky, these are made of aluminium. Despite what people commonly think, aluminium is 8 times stronger than steel, and it has no “memory”. If you repair a dent on a steel door for example, when you push it with a specialist paintless dent repair tool, it will stay in place. Aluminium doesn’t do this, so to make it pliable, heat is used. The are we are repairing will be brought up to heat with a heat gun, to around 30 degrees. This gives the panel enough flexibility for us to repair it.

Obstructions to navigate around

Once we’ve identified the dent, we need to get to the back of the panel to repair it. A dent on a front door body line of a Tesla Model 3, Model S, Model Y and Model X is obstructed by an inner support brace. The inner trim you see when you’re sat in the car has to me removed to expose the inside of the panel. Once this has been taken away, certain cables will be disconnected. Once this is complete, the carrier plate holding the speaker and cabling will be removed, then we have really great access to get to the back of the dent. The brace we mentioned earlier s then bonded to the panel with glue, so we have to use sharp PDR tools to get up and under the brace, squeeze through the glue to repair the dent! As you can imagine it takes a lot of skill and time to remove these types of dents.

Outcome and saving a repaint

Although it is a complex repair, stripping, aluminium, body line, access, and the repair itself, we expertise in these types of dent removals on aluminium body lines on any Tesla. By having dent like this repaired and removed, you can save an awful lot of money compared to a traditional bodyshop fill and paint. They will want to sand the dented area down, body fill it, prime, then have to paint and blend the adjacent panel nest to it. You can be without your car for a week, whereas our repair method takes on average 2-3 hours for a perfect result.

If you have a Tesla Model 3, or any EV, we are more than happy to help answer any questions you may have about getting your dent repaired and removed. Wether you would like to book your car in for a dent repair at our modern studio based in Leyland, or book in to use our mobile service to come to you, we have got you covered. Here at Dent Detail PDR, we have plenty or resources and reviews from our past Tesla owners, who have been delighted with our work! You can check out some of the reviews here, and see some of our YouTube repair videos here.

Thank you for reading!