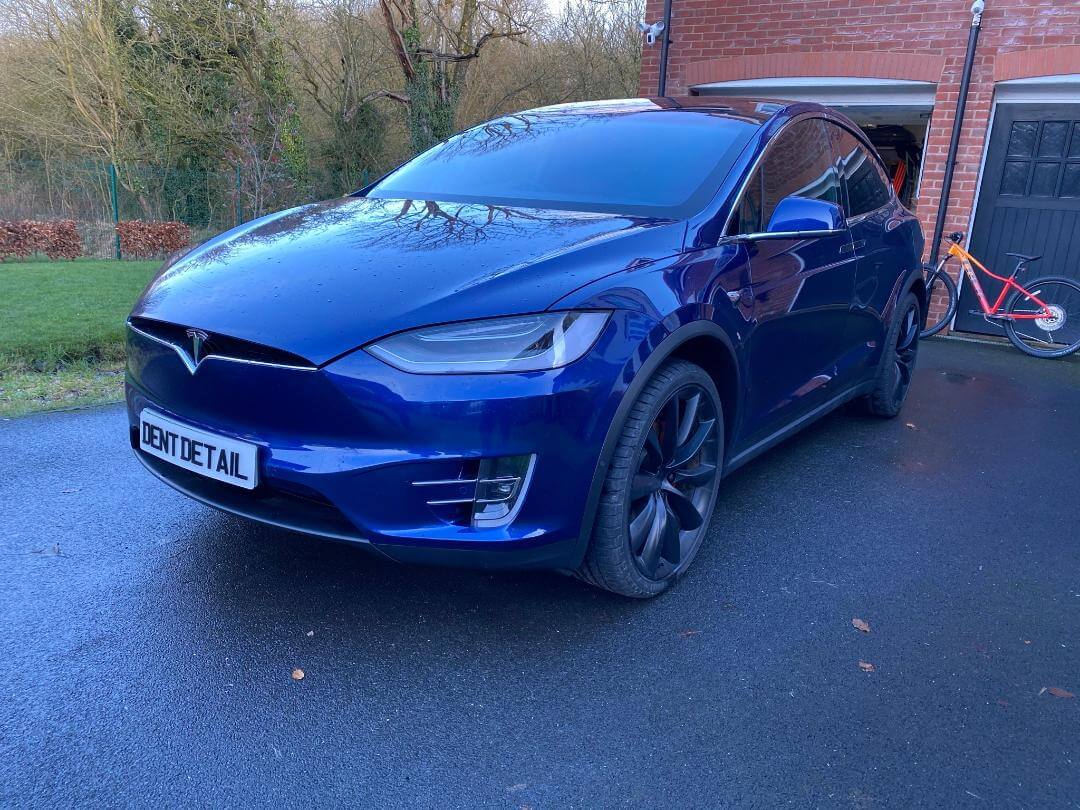 Dent Repair on a Tesla

Tesla cars have paved the path for the acceptability of electric vehicles in the market. After Tesla cars became a popular option for market enthusiasts, several other electric vehicle manufacturers started to follow suit. Now, Tesla faces intense competition, but their vehicles still manage to stand out somehow. When you opt to buy a Tesla, not only are you saving money from the expensive fuel you have to get from a car station, but you also have to remember your car does not have a traditional combustion engine.

This means regular oil changes and worries of a dirty fuel filter won’t be a problem. Since there are several things you can get done remotely, visiting a car repair shop isn’t necessary in most cases. But apart from the factors that you can control – what about the ones you can’t?

Dent and dings are unexpected. Waiting in line for an auto body shop repair can be annoying, but what is your other option?

Paintless Dent Repair on a Tesla

When you opt for a paintless dent repair on your Tesla, your car’s dented panel is reshaped. Because of this procedure, there is no need to fill the ding with body filler, and since the PDR technician didn’t remove the panel, there is no longer a need to paint a new one either. To fix your Tesla, the dented panel on your car is pushed out with the help of tools specifically built for the job.

Since the PDR method is a lot more affordable than the traditional dent repair method, it is the top choice for most people. With that said, PDR can’t repair every dent. Think of it this way, while PDR can be a flu shot, an auto body shop repair is a surgery for your car.

The Benefits of Paintless Dent Repair

To repair your car with the traditional method, the dent repair specialist first fills up the dent with body filler, and then that area is painted over to make it look like your car is ready to be driven. The paint can release harmful fumes into the air, which can be bad for the environment. While on the other hand, PDR does not require the painting process at all.

Good for Your Car

Unlike the autobody shop method that can compromise your car’s structural integrity, the paintless dent repair method doesn’t. Since your car’s protective coating isn’t damaged, your car can stay dent-free for a more extended period!

Why Should I go to Dent Detail?

We are one of the few Dent Repair companies that are trained to properly power down your Tesla or other electric vehicles. This will reduce the risk of damaging your vehicle and cause harm to the dent removal technician. Our technicians are accredited by The Institute of the Motor Industry. Trained specifically on EVs. Being awarded in Electric/Hybrid Vehicle Routine Maintenance Activities means that we have been correctly trained to power down, and power up all electric (EV) and hybrid vehicles to their respective manufacturer’s requirements.

At Dent Detail, we have been using PDR to remove dents on different models of Tesla like:

If you need PDR, we are available for dent repair in different areas of the UK like:

To see if your car is eligible for PDR, contact us today for more information or get a free quote!